MAVER PASSES, SO DOES MITCHELL

MAVER PASSES, SO DOES MITCHELL

Calgary Stampeders player #19 (QB) Bo Levi Mitchell gets ready to throw the ball as the Edmonton Eskimos take on the Calgary Stampeders during the pre-game warm-up before the first half half of CFL game action at the Brick Field located at Commonwealth stadium in Edmonton Saturday, September 07, 2019.(CFL PHOTO - Walter Tychnowicz)

The freshly-minted winningest signal-caller in franchise history had nothing but compliments for the wanna-be QB’s technique.

“Maver’s form?’’ teased Bo Levi Mitchell mischieviously. “I mean, I’ll tell you what – he works on it all day at practice, every day.

“Whenever I was down, man, and they told him he might be the third-string guy and he came out in that black jersey, you don’t know how happy that made him.

“The guy’s always asking tips on how to throw. He loves it.

“Ballsy call. Helluva call for us to go out and get a touchdown right after.”

If the final nail in an already virtually-closed Edmonton Eskimos coffin arrived with DaShaun Amos’ 79-yard interception return for a TD 11 minutes into the fourth quarter, the perfectly-executed third-down fake punt/pass from Rob Maver to Ante Milanovic-Litre for 25 yards and a first down that set up the Calgary Stampeders’ go-ahead points had to rank as the turning point in Saturday’s 33-17 slapdown of the homesteading Edmonton Eskimos in front of 40,000-plus at Commonwealth Stadium.

Four snaps after the trick call had caught the Eskies with their proverbial pants down around their ankles, Mitchell connected with Eric Rogers for an 11-yard major and the invading Stamps had grabbed a lead – 17-10 – they would only build upon, never relinquish.

“I’ve said it before and I’ll say it again – I’d rather throw the football than kick it,’’ confessed Maver.

“I like having those bigger contributions. Punts can be big contributions but anytime you can put the offence back on the field, it’s great.

“It’s good to know that Bo doesn’t think I suck.”

Hey, 1-for-1 and 25-yard average isn’t bad for a guy moonlighting at the job.

“Maves,’’ laughed Milanovic-Litre, “lives for that. 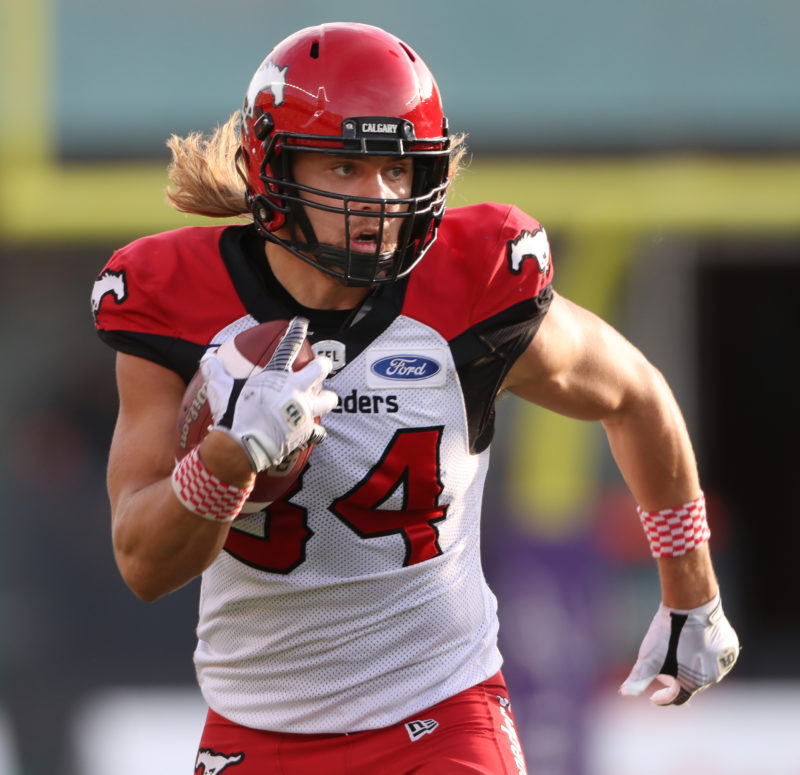 “He takes his job super-seriously so when they throw in these, he’s gonna throw a perfect ball, execute it properly. I’m sure he’s been thinking about it since the last time we ran it, in Hamilton.

“Hats off to him. He sold it. A risky play, I’m sure. We have a connection. He throws a nice ball.

“So beware when he goes back to punt. He can throw it pretty it good.”

Mitchell shrugged off three interceptions to finish with 254 yards passing on 25 completions in 40 attempts and post win No. 72 over his stellar red-and-white career, thus passing Smilin’ Hank Burris at the summit of the Stampeder QB victory list.

“It’s a great feeling,’’ said Mitchell. “It speaks to the work this organization’s put in and the trust they’ve put in me over the last couple years. And then in the off-season, bringing me back.

“My credit obviously goes to the guys around me. You can see when I’m not my sharpest and trying to press a little bit, trying put things in windows against that good defence, guys have my back.”

And coach Dave Dickenson knows full well that Mitchell has theirs. Every blessed one of them.

“He makes the big throws,’’ lauded the Hall of Famer quarterback-turned-coach. “He’s just a winner. Him and I, we play off each other. We’re just so competitive. I want him to be better and better and better. He wants to be the best.

“His winning percentage is amazing.

“He takes ownership. He takes leadership. Makes his own mistakes but owns them, moves forward and wins.”

Eskimo starter pitcher Trevor Harris, conversely, lasted into the second quarter before exiting due to an upper-body injury. To that point in proceedings, the league’s most prolific passer had thrown for only nine yards.

So it was left to reliever Logan Kilgore mop up and it was he who tossed the fateful pass on third-down late that Amos filched and then took back to The House.

“Just right place at the right time,’’ said Amos. “Working my side, man. Got the interception, got up, Raheem Wilson got a great block on a big guy. So I just had to beat the quarterback.

“I don’t beat the quarterback, I’d never hear the end of it.”

The victory propels the Stampeders into a second-place tie in the West alongside Saskatchewan, both four points in arrears of the pacesetting Winnipeg Blue Bombers with 7-4 records.

And it complete a seasonal sweep of the rival Eskimos.

“To beat one team three times in basically one month?’’ Mayer shook his head admiringly. “And a team as good as that one we just faced?

“That’s tough. Quite a feat.

“Especially a game like this on the short week. I mean, you play a big, physical game on the Monday and then have to come back to their house on Saturday – used to be Friday and that made it even harder.

“So kudos to the guys who actually hit people. I don’t  do that.

“I know a lot of guys in this room are pretty sore right now. But I know that they’re also pretty happy.”