On paper and in theory, the Toronto Argonauts were a smart pick for an upset.

Their record aside, the Argos had played relatively well over the last month or so, going 2-3. They were rested, coming off of a bye week and went into that bye on a high note, having throttled Ottawa 46-17.

But if you looked at their depth chart, you saw their issues. Reggie Begelton, the league’s leading receiver, was out with a pulled groin. Markeith Ambles and Richie Sindani joined him on the one-game injured list. A quartet of youngsters, in Josh Huff,  Aaron Peck, Michael Klukas and Colton Hunchak found themselves starting. Eric Rogers was the only veteran in the starting receiving corps.

Add in running back Don Jackson and linebacker Cory Greenwood — the league’s leading tackler — being out and you could start to think that maybe the big cheese of the CFL might be taking on a Swiss look.

Depth charts and the theoretical sometimes don’t hold up to reality.

It wasn’t pretty, but the Stampeders controlled the game on Friday night at BMO Field, gutting out a 23-16 win. They leave Toronto at 9-4, with the same 18 points that West-leading Winnipeg has (the Bombers can add some distance with a win in Montreal on Saturday).

The result had them looking every bit the part of the team that has dominated the league for the last decade; even if many of the faces were unrecognizable.

“If you look at our roster, we’re probably 70 percent different from last year. It’s unbelievable,” Stampeders head coach Dave Dickenson said. “I mean, I don’t even know if people know all of the names on the back of the jersey. But we’re playing for the horse, we’re playing for Calgary and we want to come in and work hard and play well. When we do that we do expect to win every game but right now the guys have no clue on history.

“They don’t even understand what we do, whether we’ve had success here or not because it’s just such a young, fresh team.”

The lead was comfortable most of the night, save for the final two minutes when James Franklin found Derel Walker for a 35-yard touchdown to make it a one-score game.

Mitchell spoke on Thursday of having to be patient at times with his receivers and acknowledging that mistakes would be made. Mitchell looked to Rogers 17 times and the 28-year-old produced eight catches for a game-high 119 yards with the Argos’ defence keyed in on him all night.

It was a comfortable lead most of the way, but the game could have been put away much earlier. Rogers had a surefire touchdown slip through his fingers and a couple of other contested passes that he couldn’t hang on to.

“You’ve got to understand at times (mistakes) are going to happen and I think frustration comes out definitely at the most crucial times,” Mitchell said. “But it’s not like I was perfect. I didn’t have my stuff today, again.”

Mitchell made 33 of 48 passes for 342 yards and a touchdown, with two interceptions.

“I think guys made some big plays and obviously we had drops as well but ultimately I told them that it was a close game. We did enough to win and it’s hard to win in the CFL. It feels good,” Mitchell said. 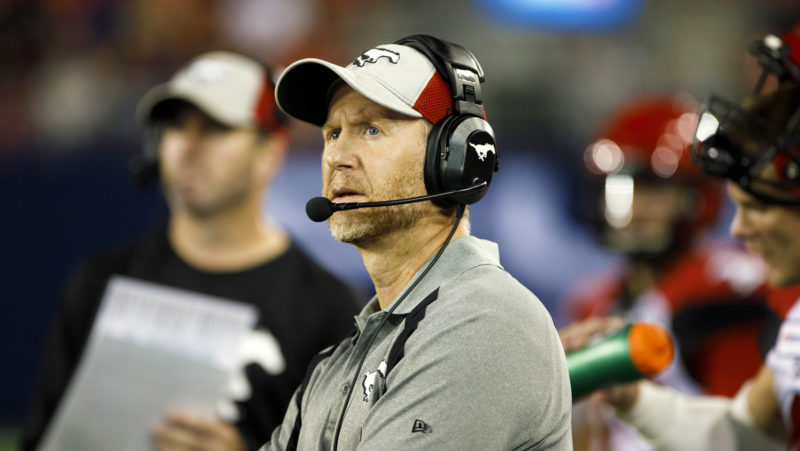 They didn’t look like runaway favourites on Friday, but Calgary’s combination of banged-up bodies and fresh-faced fill-ins got it done. That’s what championship-calibre teams do.

“I don’t know the numbers (for the receivers),” Dickenson said immediately after the game. “The number that matters is more points than them. We made the plays when we had to but it got dicey.

“There’s so much to learn. I watched the tape at halftime and it just felt like to me we were just not quite doing things at the championship level; now, we’ve got a lot of new parts but if you look across the board we know our execution needs to be better.”

Overall, Dickenson sounded optimistic about his team and the challenge/opportunity that so many young players can present.

“You can tell we’re building,” he said. “It’s a lot of two steps forward a couple steps back, but I do feel like the guys are really playing hard and the effort is intense.”