Marquay McDaniel had the opportunity to speak with the media about the Red & White’s receiving corps, preparations for the 2020 campaign, and more.

Here’s what the Stampeders receivers coach – and former on-field standout – had to say about the upcoming season:

On the young Canadian talent, including Hergy Mayala and Richard Sindani:

“They’re young but made some plays in this league right … I told Richie (Sindani) he has to have that confidence, he has all the tools of a good football player. If he wants to take his game to that next level he has to have that confidence in himself … Hergy, he just got comfortable in the offence towards the end of last season, you could just see him making plays. He’s a good route runner, and can do a lot of different things in the offence. The main thing with those guys is experience, it’s big. I think you get better the more experience you get.

On his return to Calgary:

On COVID-19 affecting the CFL season:

“There’s not much you can do, right? I’ve always been a roll with the punches type, you can’t really worry about stuff you can’t control. I would love to be on the field with the players, I think that’s where I think I can make my mark with them so that’s one thing I’m kind of missing out on right now. But at the same time right now I’m getting more time to go over the details of the offence and little stuff like that, watching more film and evaluating these guys, too. It’s a gift and a curse. I feel bad for the players emotionally man, I couldn’t imagine being in that situation. Especially for veteran players, your years are counting down and you miss half the season or the whole year.”

“Both have a lot of talent. I think Pinto reminds me of a Hergy type of receiver but with more speed. Watching his college film you can see he can do a lot of things, he can get down the field vertical but he’s also a smart kid who can run routes in zones and know those defences. And Rysen, he’s a big man, a 6’7 receiver who can go up and get the ball. I saw him on tape catch a ball with four people around him. My whole thing with receivers is teaching them the game, it might be a little different from college, but also working on stuff they might not be that great at … guys can be weak in certain areas and I hope I get the chance to (help them.)”

On the difference between coaching and playing:

“It’s way different. It was way easier being a player, in my opinion. Of course the hours are different, but for me it’s looking at the big picture. As a player you had to know defences, and to me as a coach you have to figure out, ‘ok, how do I want to attack these defences?’ I’m still learning a lot in that area. I think being in Montreal last year I took a big step in that and then being around these coaches here, these guys are some smart good coaches. I always tell people that playing is kind of like checkers, I make a move the defender makes a move. As a coach, it’s almost like chess. You got to see what the defence is doing and make a move to counter theirs. From a coaching standpoint you just have to see the big picture.”

On a Kamar Jorden comeback:

“Talking to him around the time I came back to Calgary he said he was feeling good and feeling better than he did at the end of last year. I saw him running routes and he looked like he was back to normal.  I thought at the end of last year when he tried to come back I think he was back to being KJ, or close to it. And seeing him run around outside it looked like he was pretty much back to normal or close to it. I’m hoping he’s healthy and has no setbacks, he was looking good out there.”

On the Black Lives Matter movement:

“It looks like it’s heading that direction (towards getting better) because you see stuff actually happening, you see people being held accountable. You see a lot of other people speaking up … I went to a rally out here in Calgary and I think the thing that made me happiest was the support from other people. People that don’t look like me, people who hear about stuff ad it may not affect them but they were right there on the front line. I think now you see a lot of athletes who are saying they will kneel with their payers or their brothers if that’s what they want to do. It’s not a form of disrespect towards the flag, it’s about equality. I think more people are speaking up now and more people are understanding it’s been a problem … I hope things get better, it’s been happening for too long. You just want to see people held accountable in the long run.”

On filling Reggie Begelton’s position after his departure to the NFL:

“KJ, looking the way he does you would hope he would just come in and fill that spot. That’s one thing about Calgary, when someone leaves someone back fills the spot. That’s how it’s always been, the talent is always going to be here. With that, there’s guys who didn’t play much last year that gained some experience. That’s the big thing about pro football, the more experience guys can get (the better). Injuries are going to happen so to have guys who are ready to plug in (is important).

“That’s big, that’s number one for me as was receiver. To me, Bo is the best quarterback in the game, I know he had some injuries last year so hopefully everything is good with him. Bo being under centre makes everything better.” 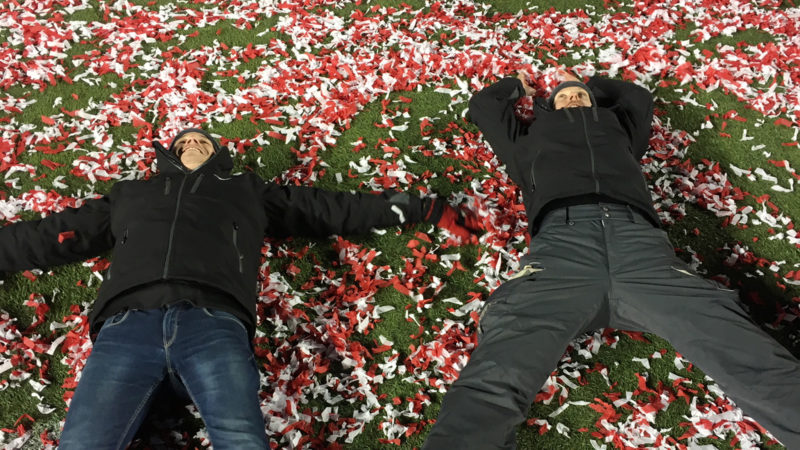