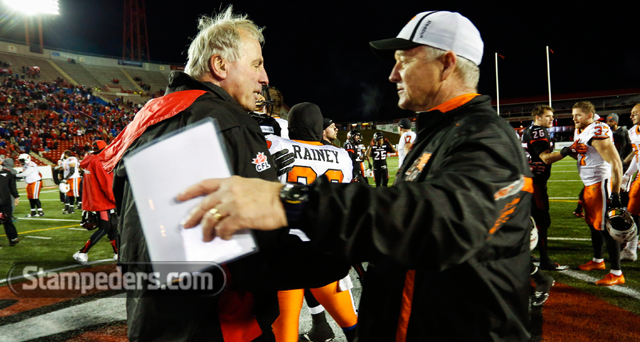 Here’s a closer look at Sunday’s 35-9 Western Semi-Final victory over the BC Lions as the Stamps earned a date with the Edmonton Eskimos in the division final:

As the minutes ticked down in Sunday’s contest, a fan was shown on the Stampstron holding up a sign with a simple message: “Thank you Huff.”

The expression of gratitude was probably tied to the amount of good football Stamps fans have been treated to at McMahon Stadium during John Hufnagel’s eight-year tenure as head coach.

Counting the regular season and playoffs, the Western Semi-Final was Huff’s 79th and final home game as Stamps head coach. It all started back on June 26, 2008, when the Red and White defeated the Lions 28-18 in the season-opener. Coming full circle, Huff’s run at McMahon wrapped up with another victory at McMahon.

The Stamps won more than three-quarters of their home games under Hufnagel, posting an impressive 60-18-1 mark including a 5-2 record in the playoffs. Calgary had a winning home record against every CFL opponent including perfect marks against Hamilton (8-0) and Ottawa (2-0) and at least twice as many wins than losses against every West rival — Edmonton (11-4), Saskatchewan (10-4-1) and BC (10-5).

Under Huff, Calgary was 7-1 at McMahon against both Winnipeg, who switched from the East to the West in 2014, as well as Montreal and 5-3 against Toronto.

Sunday’s 26-point margin of victory was the Stamps’ largest in the post-season since a 33-point difference in a 37-4 pounding of the Eskimos in the 1995 West final.

Six of the Stamps’ eight post-season wins under Hufnagel have been by fewer than 10 points with the exceptions being Sunday’s Western Semi-Final and last year’s 43-18 Western Final rout of Edmonton.

In his playoff debut during the Stamps’ Western Final win over Edmonton a year ago, Rogers had two touchdown catches. On Sunday against BC, he had two more scores.

That’s four majors in a couple of games, already good for a fifth-place tie in team history.

The players ahead of Rogers — especially those who played in the 1960s and early 1970s when the playoffs included best-of-three series — had the benefit of many more games.

Herm Harrison, for example, scored his five touchdowns in 23 semifinal and final games while Gerry Shaw had four in 18 contests.

Three players who were part of the great Stamps teams in the 1990s are also on the list — Allen Pitts, who holds the team record with seven playoff touchdowns in 13 games, as well as Travis Moore (six touchdowns in seven games) and Vince Danielsen (four scores in 12 playoff appearances).

Junior Turner, a defensive tackle who was pressed into action on the other side of the ball when starters Pierre Lavertu and Shane Bergman went down with injuries, on Sunday became the 14th player to see action on the offensive line for the Stamps this season.

Lavertu and Bergman were both hurt in the first half, which means the Red and White played a large chunk of a playoff game with only one starter — Spencer Wilson — from their lineup in the season-opener and a pair of players who were on the D-line depth chart to start 2015 in Turner and Quinn Smith.

Despite the patchwork unit, the Stamps managed to keep quarterback Bo Levi Mitchell from getting sacked.

Sunday’s injuries exacerbated an already challenging situation as the Stamps went into the game with five offensive linemen on the injured list including their 2015 first-round draft pick Karl Lavoie and three projected starters heading into camp this season — Dan Federkeil, Edwin Harrison and Brander Craighead — as well as Brad Erdos, who stepped in and made eight starts when injuries started decimating the line before he himself wound up in sick bay.

Craighead has been sidelined since training camp and Harrison suffered a season-ending injury in the third game of the season. Federkeil has missed a total of 10 games in two separate trips to the injury list.

Lavertu, the first-year starter at centre whose status for the Western Final is uncertain, is the only player to start all 18 regular-season games and one playoff contest at the same position.

The Stamps have used four different starters at left tackle, three each at right tackle and right guard and two at left guard.