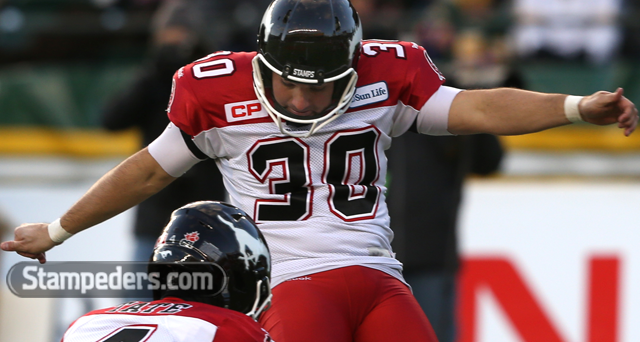 While Rene Paredes did his job on Sunday, he was relied upon much too often when all was said and done.

Paredes, recently named a 2015 finalist for the CFL’s Most Outstanding Special Teams Player, connected on all five of his field goal tries in the Western Final. Despite the stellar individual performance, the Red and White were denied the opportunity to defend their Grey Cup title in the big game.

“It’s tough,” said Paredes in a sombre post-game locker room at Commonwealth Stadium. “We’ve been here before and it hurts. You’ve got to give (Edmonton) credit. They came out flying and playing around. Like (Coach) Huff said, they made a few more plays than us and that’s what happened.”

The Stamps managed to drive the ball deep into Eskimos territory on numerous occasions throughout the afternoon, but their inability to find the end zone until the fourth quarter ultimately proved costly.

“I was just doing my job,” offered the 30-year-old, who has now made 22 of his 23 attempts in nine career post-season games. “I’m not going to comment about the offence or the defence because I don’t play that. They fought all game and when my name was called, I just did my job.”

Calgary trailed by a seemingly insurmountable 45-15 margin with under 12 minutes remaining in the contest but Paredes and the rest of his teammates never gave up hope that a miraculous comeback was possible.

Many may have counted out the Stampeders at that point, but back-to-back touchdowns from Eric Rogers and Joe West paired with two-point conversions courtesy of West and Bryant Moniz got Calgary within 14 points of a tie. In the end, the final scoreboard read 45-31 as time expired.

“The whole game, we believed,” stated the Venezuelan-born Concordia product. “We knew it was going to be tough. The guys played their hearts out. They did whatever they could to come back. Unfortunately, a couple (more) plays, and who knows?”

A high-scoring affair was not to be expected, although the Stamps were anticipating a ruthless battle between the league’s top two teams who had each recorded 14 wins against only four losses. The Eskimos were the only team to win their season series with the Stampeders.

“We were the best two teams all year,” the all-star placekicker explained. “We had the best records. One of us had to win and it was them. I wouldn’t be surprised if they won (the Grey Cup) at all. (But) all of the guys fought on our team.”