That was the fullback’s reaction to Wednesday being the final two-a-day of pre-season.

The 11-year CFL veteran knows the importance of training camp, but with both of the club’s pre-season games behind them already he’s eager to move on and begin the quest for the Grey Cup.

“It’s always a long process,” said Cote. “This year was a bit different, it feels longer right now because we already finished our two pre-season games. Now it’s a mix of focusing on competing and making the team and trying to prepare for week one of the season.”

Due to the early pre-season schedule for the Stampeders, they opted not to hold the annual Red and White game at McMahon Stadium. Instead, they’re going to run a game-like scrimmage Thursday.

“It’s practice with situational football. We’re making it seem as game-like as possible,” said head coach Dave Dickenson. “We’re going to have a clock, we’re trying to get refs here, we’ve reached out to them. We’re trying to get them thinking like it’s a game. Hopefully guys will be locked in, understanding what the game situation is, whether they need to be in bounds, that type of stuff. Just trying to reinforce some of the things we’ve been going over all camp.”

Through two wins this pre-season, the Stamps have seen a lot of good things from their players, making roster decisions that much more difficult.

With cut down day looming this Saturday, Dickenson is hoping that this scrimmage can help separate certain players in their respective position battles.

“Most of the guys should play in the scrimmage,” said Dickenson. “It is a chance, especially for some positions where it’s a close battle. It’s getting to that time where you get your final dress rehearsal. We like to say that games matter the most, but practice is important to me. You can show me what type of player you are in practice.”

After a very strong performance defensively for the Stamps in the pre-season opener against the BC Lions, where they recorded five quarterback sacks, two interceptions, and two forced fumbles, things weren’t as pretty in the second game.

Though two starters recorded sacks against the Edmonton Eskimos, the defence allowed 17 more points and didn’t find a way to take the ball away from the opposing offence. 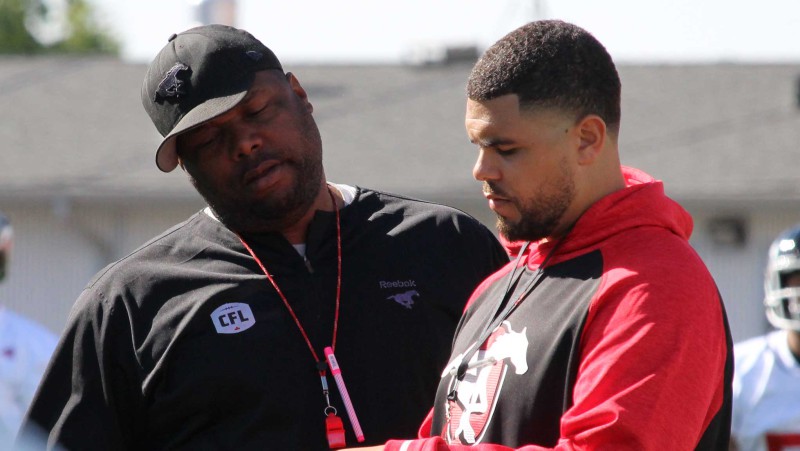 Defensive coordinator DeVone Claybrooks said the coaching staff has focused on fixing the mistakes made in the pre-season tilts and building on the positives.

“Just looking for them to be assignment sound and fly around,” said Claybrooks. “I’m looking for the young guys to step up and take the coaching and try to grow, especially with the mistakes and stuff we made in the games. You’re just looking for improvement and you’re trying to get better every day.”

He wants to know that his players understand the basics and can execute the small details because those can be the difference between winning and losing once the regular season starts.

“It’s an extra shot to evaluate them,” Claybrooks said. “Because we had our pre-season games so early, it allows us to have one more good look in a game-type situation to see how they handle the clock management, coming on and off the field and things like that.

“You really want to make sure they have the little things and the details down. It’s those things that really don’t matter until they matter in the game.”