Head coach Dave Dickenson during a scrimmage at 2017 training camp

The Stampeders marked the end of their 2017 training camp with one last practice during which the team simulated various game situations but, most importantly, got one final look at some players pushing to make the roster.

“It was a spirited practice with a high compete level on both sides of the ball,” head coach Dave Dickenson said. “This last practice/scrimmage was the last chance to audition and some guys made big plays and looked good. It makes those decisions tough.”

And those decisions are the final cuts that that will be made come Saturday evening when the roster is decided. A task that will not be easy for the coaching staff and management to make after the strong showing many players put on all camp. 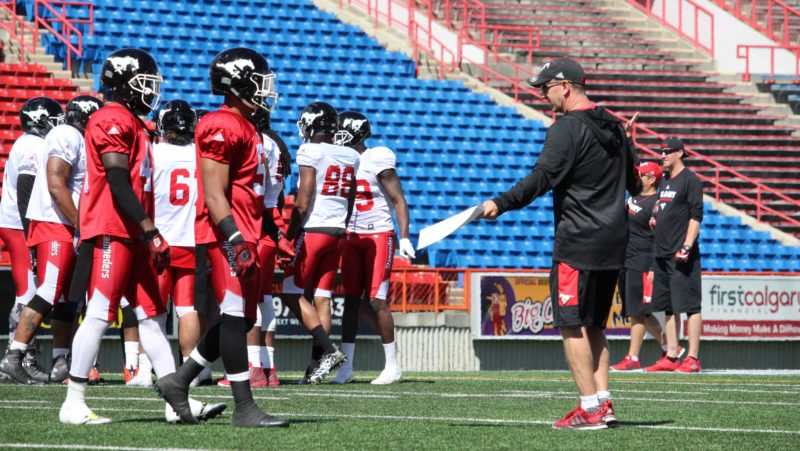 Dickenson ensured that everyone was given an opportunity to showcase their skills and impress. That can be difficult to balance out at every positon, with a handful battling for those limited spots.

“I did my best to give everyone a shot,” Dickenson said. “That’s tough on rookies because there’s not enough time, but I believe we gave everyone a shot. It’s a tough business, it’s a business we choose to be in and it’s a great business to be in. There’ll be some people disappointed come Saturday but that’s part of the process.”

Overall the general consensus is how fast the camp came and went but despite the clock ticking closer to Saturday, the second-year head head coach was content with the drive and commitment shown by all the players.

“I pushed them hard, they’re tired from it. It’s time to let them have some rest,” Dickenson said. “Decisions are starting to get made and they’re realists – they know the cuts are coming.”

For quarterback Ricky Stanzi, it was a new experience, but one that he thoroughly enjoyed whether he was taking snaps under centre during the practices or pre-season games. 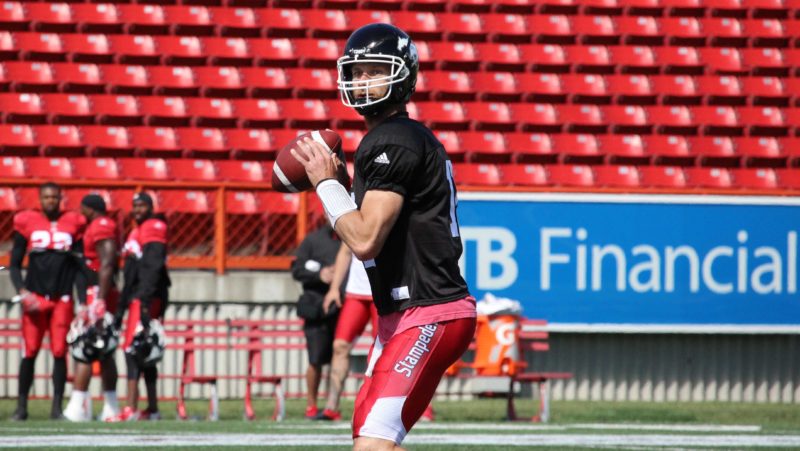 “It was a very funny experience,” Stanzi said. “It’s always fun to really learn the same sport in almost a new way. I enjoyed the ups and downs of camp and learned a lot, I became more comfortable with the visual side of the game.”

There’ll be some nerves to the lead-up of Saturday for Stanzi and many of the other players who will be siting by their phones to get the call they are hoping to get. He understands that it’s a process and it’s in the hands of management whether he’ll be donning the colours of the Stamps for the rest of the season.

“It’s in a state of where it’s not in your control anymore,” Stanzi said. “You get that feeling of being a little anxious and fidgety. For now, it’s let the chips fall where they may and be at peace with knowing that you put your best effort.”