Even before setting foot in the home locker room at McMahon Stadium, Bruce Covernton was the answer to a Stampeders trivia question.

Sure enough, 1992 was the year Buono added the general manager’s portfolio to his head-coaching duties and he spent the first overall pick in that year’s draft on a big o-lineman out of Weber State. 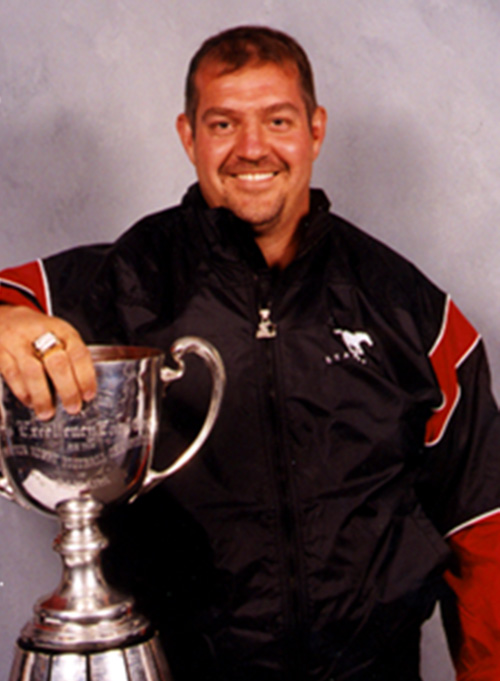 Covernton is joking, of course. And any rookie naivete he may have harboured quickly disappeared in the years that followed as he battled injuries and suffered the heartbreak of some near-misses by some very good Calgary teams in the mid-1990s. It wasn’t until 1998 that he and the Stamps were able to celebrate another championship.

But in that first professional season, everything went swimmingly for the man nicknamed “Tuna.”

The colourful Covernton is one of the true characters in Stamps history and he was that way from the very beginning.

“I was one of the louder rookies,” he admits, “which means I was the target of all the pranks and the jokes by the veterans. It was pretty funny. Maybe I didn’t think so at the time but, looking back, it definitely was funny.”

Covernton remained with the Stamps through the 1998 season and the Morris, Man., native decided to make Calgary his permanent home after retiring from the CFL. He is owner and president of Big Fish Staffing, a staffing and recruiting company he founded in 2016.

He has remained in the game as a minor-football coach in the city and his larger-than-life personality has also been put to good use as an emcee for football-related events including the CUPS Stampeders Kickoff Breakfast fundraiser.

Bruce Covernton will be in the Fan Zone signing autographs from 5:30 to 6:30 p.m. before tonight’s game!