Huff Ready To Take Off

Huff Ready To Take Off

The ‘Huff’ moniker is synonymous with success in Calgary.

And Josh Huff believes he can continue the tradition with a breakout campaign in 2020.

I will be one of the top WRs if not the best WR in the CFL this upcoming year. STAMPED

“Whether I get the opportunity to showcase that … every chance that I do get this season, I’m going showcase that I am one of the better receivers in the CFL,” stated Huff. “I wholeheartedly believe that even last year I was one of the top receivers, I just wasn’t able to show that as many times as I would have liked. I’m looking forward to my role expanding this season and getting back in it and trying to bring another Grey Cup to Calgary.”

The 5-foot-11 receiver from Houston joined the Stampeders last season after a three-year NFL stint in the NFL with the Philadelphia Eagles and the Tampa Bay Buccaneers.

After earning a roster spot with the Stampeders, Huff didn’t see the field until Week 4 against the Saskatchewan Roughriders, but was promptly sent back to the injury list after aggravating his prior ailment.

When the Oregon Alum hit the field again in Week 10, he started to show his promise. Playing in 10 games the rest of the way, Huff compiled 557 yards and a touchdown on 43 receptions.

While biding his time on the sideline watching his teammates go to work, Huff relied on some of his fellow receivers to stay the course and focus on the goal. 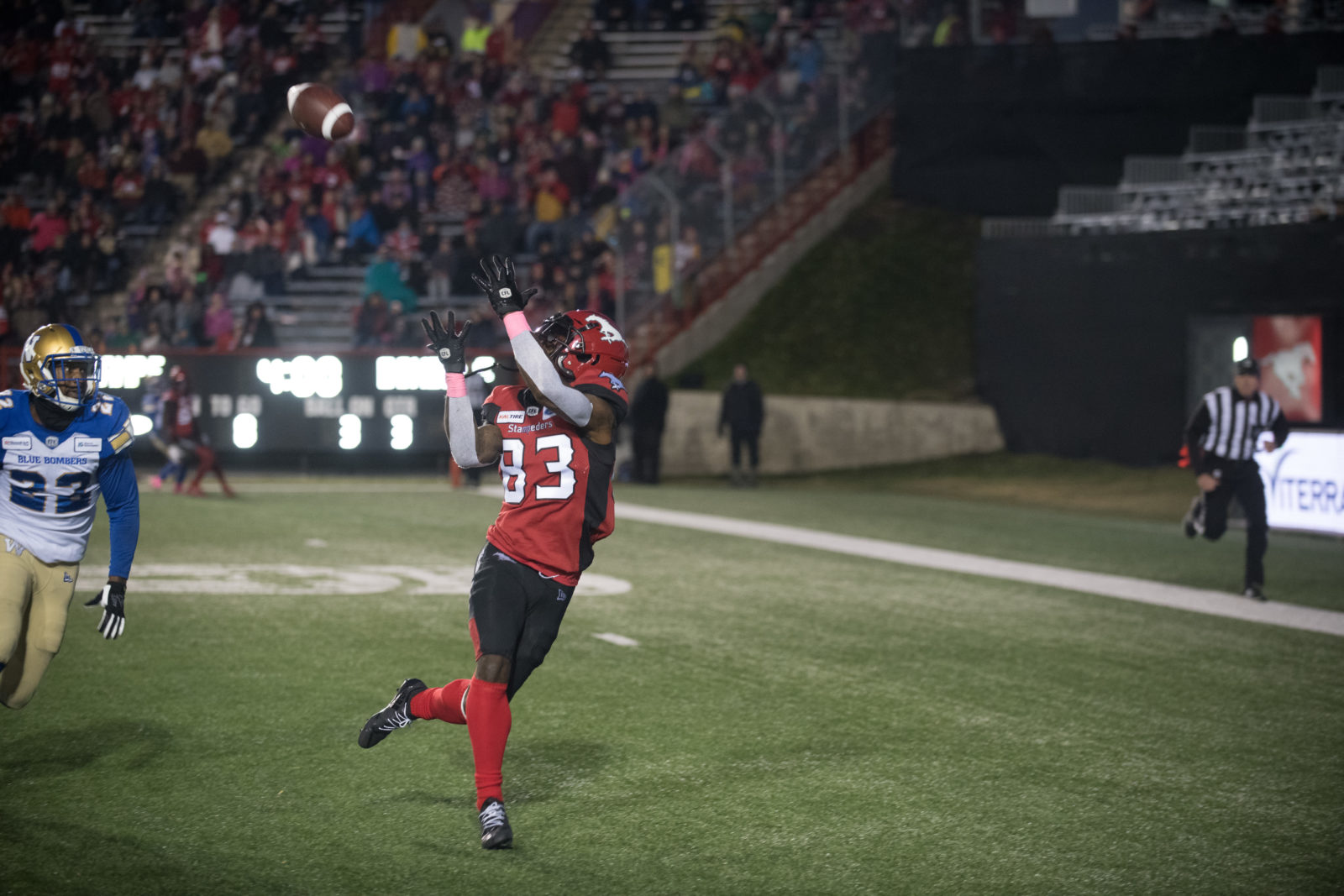 “I leaned on Reggie Begelton and Kamar Jorden’s experience,” Huff admitted. “They both had to spend time waiting to get into the line-up because of the ratio and other things, so I was able to take a couple of pages from their notebooks and just stay ready to play.

“Reggie and I are real close, he was my locker buddy and we talked on the regular, just picking each other’s brains. He stayed on me even when I was getting down. I was always confident in myself, but you can lose some confidence when things aren’t going well or when you’re not playing. Reggie was able to keep me sharp mentally and physically, he would challenge me in practice each and every day.

“It was the opportunity that helped me start to reach my potential. Obviously, I was able to get used to game speed with the couple of games that I had played. So I was really able to really understand the schemes and things going into the Montreal game. Bo has always had that level of confidence in me, ever since I stepped on the field at McMahon Stadium. He instilled that confidence that any time he throws me the ball, he expects me to make a play and I try to do that to the best of my abilities. This season, I look forward to enhancing our chemistry and making it more lethal.”

With his sights set on the upcoming CFL campaign, his focus is two-fold – becoming an example for the younger receivers, and growing into a bigger role in the offence.

“I want to take the next step in being the leader that I know I can become,” he explained. “First of all, I want to be the best possible person I can be. It’s me versus yesterday, you know? As long as I keep that mindset, I feel like I can bring along the other receivers and we can accomplish something great together in Calgary.

“That’s something that (Reggie Begelton and I) talked about all last season, especially towards the end of the season when he was getting the interest from the NFL. He kept that in my mind that there would be a lot of targets available next year. Coming in for training camp, I need to have that mindset that I need to make some plays to prove it to the coaches. I feel like I’ve showed enough explosiveness and play-making abilities that some of those targets will come my way, but I can’t get complacent, I’ve got to continue to work and try to get better.”

Those conversations with Begelton haven’t stopped since the Stampeders star took his talents to the Green Bay Packers this off-season.

The pair have been working out together and helping each other prepare for what’s next.

“That’s what football is all about, it’s about brotherhood,” said Huff. “That brotherhood lasts a lifetime and I can’t do anything but appreciate his friendship with me.”